The Mosaic Company (MOS - Free Report) reported net income of $372 million or 97 cents per share in third-quarter 2021 against a loss of $6.2 million or 2 cents in the year-ago quarter. The fertilizer maker’s third-quarter results were strongest in more than a decade, gaining from higher prices and its transformation efforts in the quarter.

Barring one-time items, adjusted earnings per share were $1.35, which missed the Zacks Consensus Estimate of $1.59.

Revenues rose around 44% year over year to $3,418.6 million in the quarter but missed the Zacks Consensus Estimate of $3,802.9 million. Sales were driven by higher prices that more than offset reduced volumes.

Net sales in the Phosphates segment rose around 75% year over year to $1,300 million in the quarter, driven by increased prices. Sales volumes in the segment slipped approximately 11% to 1.8 million tons. The segment’s gross margin per ton improved significantly to $198 from $11 in the year-ago quarter as better pricing more than offset reduced volumes and higher raw material costs.

Potash division’s net sales climbed around 27% year over year to $589 million driven by higher prices. Sales volumes in the segment declined roughly 22% to 1.8 million tons. Gross margin per ton in the quarter shot up to $131, increasing more than two times year over year.

Net sales in the Mosaic Fertilizantes segment were $1.8 billion, up around 64% driven by higher year-over-year prices. Sales volume fell roughly 6% to 3.4 million tons. Gross margin per ton in the quarter was $99, shooting up 102% year over year.

The company’s board also approved a 50% increase in the targeted annual dividend to 45 cents per share, effective with the next declaration, which is expected in December 2021. It also repurchased 956,404 shares at an average price of $35.72 per share through Oct 31, 2021.

Moving ahead, the company noted that it expects strong agricultural commodity pricing trends to continue through the fourth quarter of 2021, driving demand for fertilizers. Farmer economics remain attractive in most global growing regions on strong crop demand, affordable inputs, and favorable weather, the company noted.

Mosaic’s shares have surged 141.1% in the past year compared with the industry’s 75.9% growth. 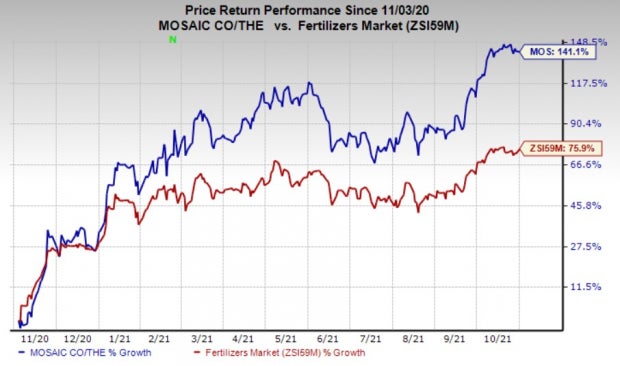 Methanex has a projected earnings growth rate of 429% for the current year. The company’s shares have jumped 51.7% over a year.

Olin has a projected earnings growth rate of 740% for the current year. The company’s shares have grown 229.3% over a year.

Arkema has a projected earnings growth rate of 88.7% for the current year. The company’s shares have surged 110.3% over a year.

Viatris (VTRS) to Report Q3 Earnings: What's in the Cards?