Revenues of $17.6 billion missed the Zacks Consensus Estimate by 0.8%. The top line improved 0.3% (as reported) on a year-over-year basis driven by steady demand for the company’s hybrid cloud business. Adjusting for currency and divested businesses, revenues declined 0.2% year over year.

Revenues from services signings increased 3% (at constant currency or cc) to $5 billion in the third quarter.

Following the year-over-year decline in third-quarter earnings and muted revenue growth, shares of IBM dropped as much as 5% in extended trading on Oct 20.

Shares of IBM are up 12.7% compared with the Zacks Computer - Integrated Systems industry’s growth of 16.6% in the year-to-date period. 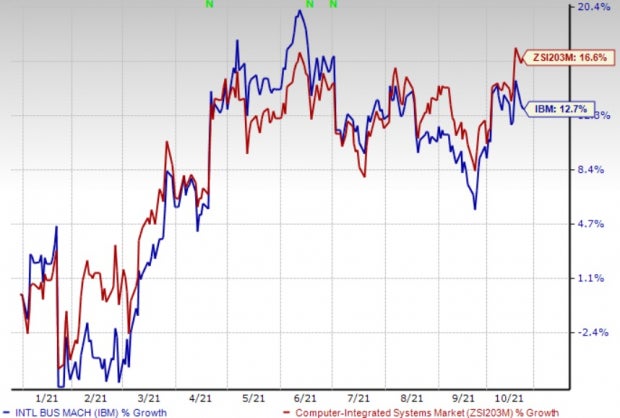 Revenues from Red Hat in the third quarter increased 17% at cc and on a normalized basis, driven by the strong uptake of Red Hat Enterprise Linux and OpenShift platform. Currently, more than 3,500 clients are using Red Hat and IBM’s hybrid cloud platform.

In addition, the latest version of Red Hat OpenShift became generally available in the reported quarter.

Additionally, the digital transformation wave has bolstered the adoption of cloud-based QRadar, Identity and Trust services as well as CloudPak for Security offerings.

Cloud & Cognitive Software segment’s revenues-external improved 2.5% year over year (up 1.9% at cc) to $5.7 billion. Further, cloud revenues (external) rose 20% to $2.1 billion. The upside can be attributed to synergies from the Red Hat acquisition as well as growth in cloud, Data & AI, security and IoT solutions.

Revenues in the Cloud and Data platforms increased 10% year over year (up 9% at cc) to $3 billion. The platform is gaining from Red Hat’s acquisition synergies and traction in Cloud Paks suite.

Revenues in the Global Business Services (GBS) external segment totaled $4.4 billion, which improved 11.6% (up 11% at cc) from the year-ago quarter.

Segmental revenues pertaining to cloud advanced 37% at cc from the prior-year quarter’s reported figure to $2 billion.

Revenues from Technology Services-external declined 4.8% (down 5.4% at cc) from the year-ago quarter’s level to $6.2 billion.

Infrastructure & Cloud Services and Technical Support Services revenues declined 6% (at cc) and 5% (at cc) year over year to $4.7 billion and $1.5 billion, respectively.

Segmental revenues pertaining to cloud decreased 43% at cc from the prior-year quarter’s reported figure to $0.3 billion.

Non-GAAP pre-tax income margin from continuing operations was 13.6% compared with the year-ago period’s 14.7%.

The company reported cash flow from operations of $2.7 billion during the third quarter compared with $2.6 billion ($1.7 billion when excluding Global Financing receivables) in the second quarter of 2021.

IBM generated free cash flow of $0.6 billion in the third quarter compared with $1 billion in second-quarter 2021.

Moreover, the company returned $1.5 billion to shareholders in the third quarter through dividends.

For 2021, IBM refrained from providing any formal guidance. The company expects to exit the fourth quarter in a position to deliver a mid-term model of mid-single digit revenue growth and cumulative free cash flow of $35 billion between 2022 and 2024.

During the fourth quarter, the company intends to complete the separation of Kyndryl, which is on track for Nov 3.

Advanced Micro Devices is scheduled to report on Oct 26 while Amphenol and ASGN Incorporated are set to release quarterly earnings on Oct 27.

Southern Copper (SCCO) to Post Q3 Earnings: What to Expect?