The Mosaic Company (MOS - Free Report) recently announced that its North American phosphate operations are expected to be negatively impacted by the damage caused by Hurricane Ida.

The company apprehends that wind damage to the Faustina and Uncle Sam facilities from the storm will cause a decline in production as repairs are expected to be finished over the next 8 to 9 weeks.

Compared with historical averages, production in the third quarter is anticipated to decline by roughly 300,000 tons. Fourth-quarter operating rates are projected to improve sequentially, but production may still be down from historical averages, Mosaic noted. The projection also includes estimates of production loss from an August equipment failure at the company's New Wales facility in Florida.

Mosaic intends to provide an update, including estimated financial impacts of the hurricane, when it reports third-quarter results.

The hurricane also led to navigational issues on the Mississippi River, which may result in congestion during the busy fall application season and might create logistical risks for the company's production.

Shares of Mosaic have gained 73.5% in the past year compared with 51.8% rise of the industry. 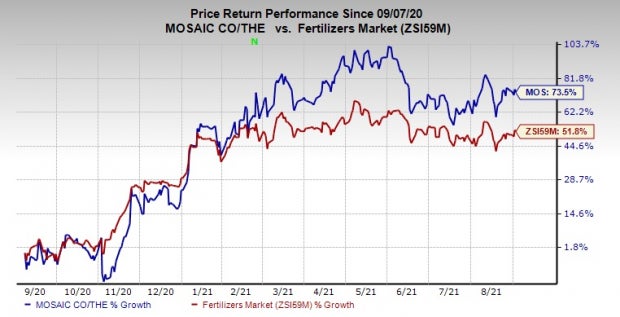 Mosaic, in its last earnings call, stated that it expects strong agricultural trends to continue through the second half of 2021, driving demand for fertilizers. Grower economics remain attractive in most global growing regions on strong crop demand, affordable inputs and favorable weather, the company noted.

The Mosaic Company Price and Consensus

Nucor has a projected earnings growth rate of around 478.7% for the current year. The company’s shares have soared 143.1% in a year. It currently sports a Zacks Rank #1. You can see the complete list of today’s Zacks #1 Rank stocks here.

Dow has an expected earnings growth rate of around 403% for the current year. The company’s shares have gained 27.9% in the past year. It currently flaunts a Zacks Rank #1.

Cabot has an expected earnings growth rate of around 138.5% for the current fiscal. The company’s shares have rallied 36.7% in the past year. It currently carries a Zacks Rank #2 (Buy).

Which stocks will be February's top performers? Our experts picked 7 stocks with the best chances of skyrocketing within the next 30-90 days. Each stock is a Zacks Rank #1 Strong Buy.