Per the MOU, the companies will carry out various preliminary feasibility studies on blue ammonia production in the United States. The areas of exploration include establishing blue ammonia supply and supply chain infrastructure, transportation and storage of carbon dioxide, expected environmental impacts, and blue ammonia economics and its probable marketing opportunities in Japan and other countries.

CF Industries noted that both companies share the common belief that blue ammonia is a key element in boosting transition to clean energy across the globe and the demand for the clean energy source will grow in the near future. The collaboration will leverage the outstanding expertise of both companies to explore the development of the capacity of blue ammonia and meet the growing demand.

Shares of CF Industries have rallied 38.1% over a year, underperforming the industry’s 55.3% rise. 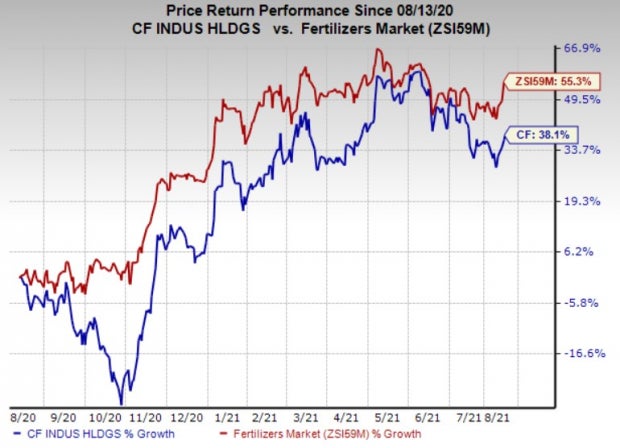 CF Industries expects nitrogen pricing to be positive as higher economic activities, the need to replenish coarse grains stocks globally and increased energy prices in Europe and Asia are expected to sustain a tighter global nitrogen supply and demand balance into 2023. The global demand for nitrogen is also strong, the company noted. It expects strong global demand for coarse grains to contribute to sustained low global stocks into 2022, supporting strong nitrogen demand in the upcoming years. Higher economic activities have also contributed to the rise in industrial consumption of nitrogen products.

Intrepid has a projected earnings growth rate of 287.5% for the current year. The company’s shares have shot up 231.9% over a year.

Mosaic has a projected earnings growth rate of 413% for the current year. The company’s shares have risen 96% over a year.

LyondellBasell has an expected earnings growth rate of around 254.6% for the current year. The company’s shares have gained roughly 54% in the past year.

Which stocks will be February's top performers? Our experts picked 7 stocks with the best chances of skyrocketing within the next 30-90 days. Each stock is a Zacks Rank #1 Strong Buy.