This is an excerpt from our most recent Economic Outlook report. To access the full PDF, please click here 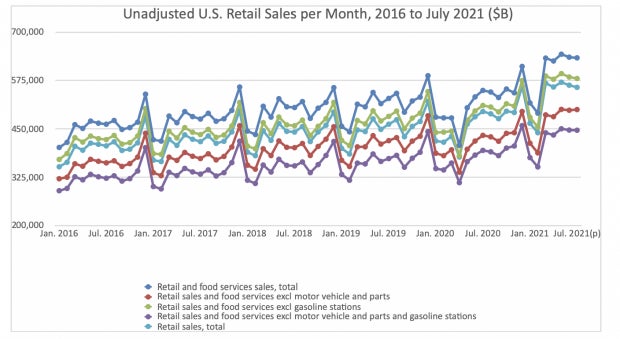 In sum, retail sales fell swiftly in March 2020, as a result of the coronavirus pandemic shutdowns. And again, during the winter 20-21 pre-vaccinated spike in COVID cases.

Which industries did COVID-19 affect the most?

The COVID-19 crisis caused consumers to shift their spending focus towards necessities. In other words, people in the United States spent more on groceries and household supplies.

Most other industries, including out-of-home entertainment, restaurants, apparel and footwear stores, saw a substantial decrease in consumer spending -- as a result of the virus outbreak.

Not only did consumers change what they bought, there were also times when shoppers would purchase larger quantities.

During the first weeks of the pandemic, hoarding was very prominent among households in the United States. Over the later quarters, pantry filling and hoarding behavior fluctuated, but showed a mostly downward trend.

First off, grocery stores sales spiked at the onset of the pandemic, ($55B to $75 a month). Grocery store sales have also stayed higher than in pre-pandemic times, as of late 2021 ($70B a month).

Cooking and eating-at-home are bigger habits now. Remote working, and fears about contacting the virus from the unvaccinated are two enduring COVID demand drivers.

As for general merchandise stores?

Sales saw a lower post-vaccination rise, but a rise nonetheless. Note the seasonal sales spikes around the U.S. Christmas holidays. A Xmas sales surge should materialize this year (2021) too.

Annual seasonality in General Merchandise sales data (above) suggests any break from consumer price pressures cannot be expected until well after Christmas of 2022.

Consumer behavior near the end of a pandemic

According to Statista, the COVID pandemic caused many consumers to exhibit different behavior patterns when shopping.

For example, about 40% of consumers in the United States gave a new shopping method or a different brand a try.

Nonstore Retailers were the major benefactors of this push to find new shopping methods. Consult that in the chart below.

In 2021, according to Statista, about a third of marketing executives at consumer product manufacturers in the United States felt more dependent on Amazon (AMZN - Free Report) as a result of the coronavirus pandemic.

Only about one in ten surveyed execs stated they had become less dependent on the e-commerce platform since the outbreak. Approximately half did not experience any notable changes.

According to a Statista poll run in March 2021, home delivery services were used by 60% of online grocery shoppers in the United States. Another 32% of surveyed U.S. consumers usually purchasing their groceries online opted for curbside pickup.

In the second half of 2021, as the United States gets closer to reaching herd immunity each day, many of the country’s consumers have also increased their leisure expenditures.

Nearly six in ten half and fully vaccinated consumers planned to spend more money than usual on certain products and services as a way to indulge themselves.
Even those who are not yet or not likely to get vaccinated planned to treat themselves in this manner.

Many American consumers specifically intended to spend a little extra on restaurants, & bars, travel, clothing, and several other items.

A Food & Drink sales chart (below) shows the evidence of this surge.

What about shopping in-store at Electronics Stores? No lift. Perhaps the opposite.

That brings us to the story of the Motor Vehicle and Parts Dealers.

Demand and Prices have been strong.

Low auto loan rates, strong consumer savings, an aversion to subway travel, and/or any other means of avoiding contact with the unvaccinated. All of these are providing a lift to auto sales.

Then, there is the semiconductor chip shortage, which modern autos rely on. This is forcing up demand for late model used vehicles, to reach record levels.