If we have the nerve to call a screen the “Best of the Best: VGM As with Zacks #1 Rank”, then you know it has to include two of the most powerful tools for investors.

The screen starts off with the Zacks #1 Rank (Strong Buy), which has beaten the market in 23 of the past 28 years. But on top of that, we’re also looking for a VGM Score of “A”, which takes the returns to even greater heights!

Below are three stocks that recently passed the test.

Before you start reminiscing about the old days, just remember that close talkers and coughers were NEVER popular. It wasn’t like we were all excited about public transportation and waiting rooms before the pandemic. It was always something we just had to tolerate, especially when travelling.

But if there’s one thing social distancing taught us, its that those RVers had the right idea all along. Not only do you get all the comforts of home while rolling down the highway, but can choose who you travel with. It’s a setup that’ll remain appealing even after we get back to normal, which is probably why the building products – Mobile homes & RV builders is STILL in the top 1% of the Zacks Industry Rank.

It also explains why THOR Industries (THO - Free Report) recently reported a strong fiscal fourth quarter while “carrying great momentum into fiscal year 2022”. THO is the largest manufacturer of RVs in the world. It’s acquisition of Erwin Hymer Group (EHG), which closed last February, made it a leader in the European RV industry. The additions of TiffinHomes and Airxcel continued to solidify its position.

It operates under three reportable segments: North American Towable RVs (52% of total RV revs in fiscal 2021); North American Motorized RVs (22%); and European RVs (26%). Shares of THO are up more than 35% so far this year.

The fiscal fourth quarter included earnings per share of $4.12, which surged past the Zacks Consensus Estimate by more than 41%. Revenues of $3.6 billion topped our expectations by 8% and jumped more than 54% year over year.

And that quarter completed “the most profitable year in THOR’s history”, as over 300,000 units were sold with more than $12 billion in net sales!

THO expects demand for RV products to remain robust moving forward, while continuing to exceed production output. And analysts appear to agree as they have significantly boosted expectations since the quarterly report.

The Zacks Consensus Estimate for this fiscal year (ending July 2022) is now up to $13.69, which has jumped an impressive 20.5% from 30 days ago. Expectations for next year (ending July 2023) moved to $13.65, marking an improvement of 13% over that time and offering plenty of opportunity for further growth moving forward. 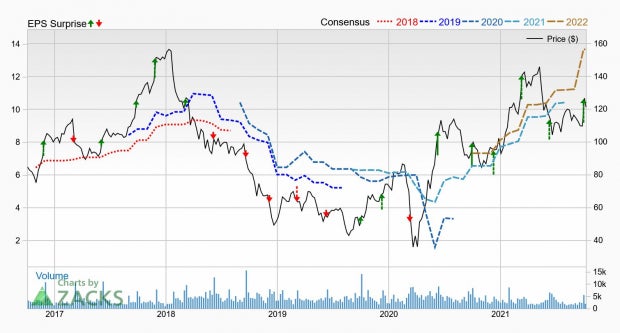 With a name like Alpha and Omega Semiconductor Ltd. (AOSL - Free Report) , you can tell this company has some big plans for the future in a crowded and super competitive space. But it’s already built up some good momentum as a new fiscal year begins, including six straight quarters of positive surprises. Furthermore, shares have jumped nearly 34% so far in 2021.

The company is currently one of only two Zacks Rank #1s (Strong Buys) in the electronics – semiconductors space, which is in the top 47% of the Zacks Industry Rank.

End market demand has been strong for a while, which was clearly seen in its impressive fiscal fourth quarter. Earnings per share of 95 cents topped the Zacks Consensus Estimate by over 26%, bringing the four-quarter average surprise up to 24.3%.

Revenues of $177.3 million eclipsed our expectation by 4.3% and also improved 45% from the previous year’s results as each of its market segments enjoyed record revenues and improved profitability.

AOSL sees plenty of opportunities as it begins the fiscal 2022. The plan is to get to annual revenue of $1 billion in the next few years. Analysts believe the company has what it takes and raised their estimates over the past 60 days. 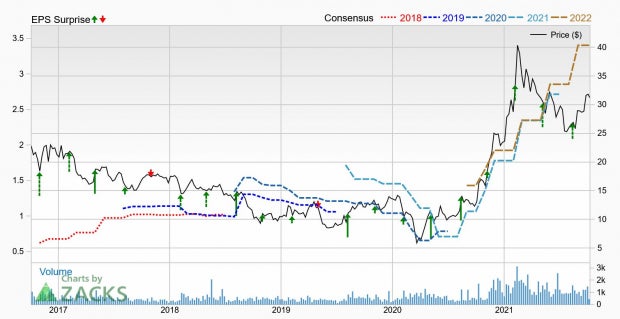 Let’s face it, the past year-and-a-half hasn’t been a time for cashmere sweaters, little black dresses or tailored suits. Instead, it’s been about hoodies, leggings, sneakers and other things that keep us comfortable at home but ready to move at a moment’s notice. In other words, it’s a good time for Hibbett, Inc. (HIBB - Free Report) .

The company was once known as Hibbett Sports, but it has evolved into an athletic-inspired fashion-focused assortment. Hibbett operates over 1,000 stores across 35 states. Shares of the company are up more than 60% year to date. As part of the retail – apparel & shoes space, it’s in the top 13% of the Zacks Industry Rank.

HIBB reported fiscal second quarter earnings per share of $2.86, which crushed the Zacks Consensus Estimate by more than 130%. The result also marked a fifth straight positive surprise and an average beat of 124.6% over the past four quarters. Net sales of $419.3 million also easily beat our expectations at $331 million.

Despite these better-than-expected results, the company actually saw declines from last year. But that was a crazy time when the normal environment was being impacted by pent-up consumer demand, store closures from competitors and of course the stimulus money. When compared to more normal circumstances two years ago, net sales are up 66.1%.

As with most retailers, HIBB had to deal with plenty of challenges, not the least of which was the supply chain issues. But the company believes it weathered the storm well thanks to its increased market share, improved customer engagement and the availability of in-demand products.

Such attributes have HIBB thinking that fiscal 2022 comps may reach the mid-teens, rather than the earlier forecast in the high single to low double digits. Furthermore, diluted earnings per share might now make it somewhere between $11 and $11.50, instead of $8.50 to $9. 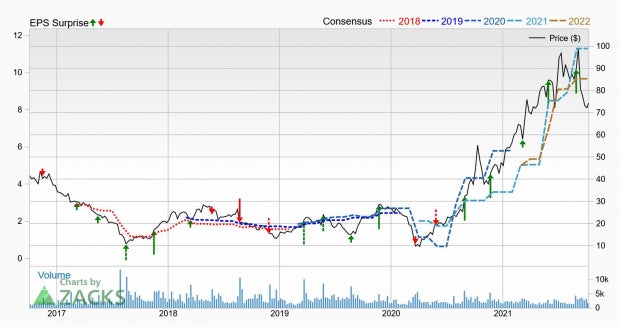 Zacks' experts picked 7 stocks with the best chances of skyrocketing within the next 30-90 days. Each stock is a Zacks Rank #1 Strong Buy.

Should Macy's Spin Off Its E-Commerce Business?